We are looking forward to welcoming you in the near future to Nicholaston House Christian Retreat Centre. We re-opened for residential bookings on 10 August 2020. Please check current availability via our bookings site: events.nicholastonhouse.org - we are unable to offer bespoke dates at this time.

Please note: Due to changes necessary to minimise covid-19 risk, some aspects of our service may differ from that described in our exisiting publicity and on our website. If you have a forthcoming booking with, us or wish to book, please read our pre-arrival information here. 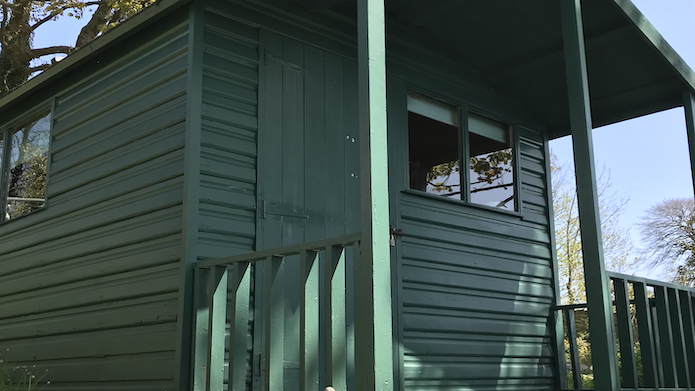 The Hermitage at Nicholaston House

Anyone who is interested in visiting or using the Hermitage can do so by contacting the Office at Nicholaston House - donations are welcomed for daily use.

Residential guests are welcome to use the Hermitage (subject to availability) during the week - please request the key from a member of the team.

The Hermitage at Nicholaston House

‘Now that same day two of them were going to a village called Emmaeus, about seven miles from Jerusalem. They were talking with each other about everything that had happened. As they talked and discussed these things with each other, Jesus himself came up and walked along with them.

As they approached the village to which they were going, Jesus acted as if he were going further. But they urged him strongly, “Stay with us, for it is nearly evening; the day is almost over.”  So he went in to stay with them.’

How the Hermitage Started

Edwin Phillips, an Anglican priest and a ‘Franciscan Contemplative’ of the Third Order of Saint Francis was called by God to erect a Hermitage to explore a life of contemplative prayer and solitude.

Edwin approached the then Director of Nicholaston House, Derrick Hancock, to enquire about the possibility of siting the Hermitage in the garden of the House. The present site was offered to Edwin, as friends of Nicholaston House had been praying that this area of ground would one day be set aside as a place of prayer.

Inspired by the writings of the late Brother Ramon, Edwin spent as much time as possible in the Hermitage and found there that peace and solitude which helped him in his life of contemplative prayer.

Edwin was eager to encourage guests staying at Nicholaston House to visit the Hermitage and to find peace in the atmosphere of prayer.

Anyone who is interested in visiting the Hermitage can do so by contacting the Office at Nicholaston House.

The key is available from the Office. Do please sign the visitors’ book.

‘A Hermitage,’ the Lord said

‘a place for you and Me,

in solitude and silence

what better place to be.’

His voice to me came sudden

As I lay upon my bed,

Was it Eli’s voice he heard?

For me it was so different

I knew it was the Lord!

I rose to be obedient

In answer to His call.

‘this Hermitage to be

a plot of land so worthy

to dedicate to Thee?’

‘A garden has been offered,

‘My people have been praying,

a place of prayer to be.’

‘a prayer hut build,’ said he,

‘Your Hermitage,’ the Lord said,

‘In his memory will it be.

‘His books will there be open

for everyone to read,

the Bible, to him so precious,

every page the Lord saw he.’

The plans are now in motion.

The land for the Lord is claimed.

At Easter time it will open

All glory to His name.

The incredible story of a retreat house in one of Wales’ most spectacular beauty spots has been published.

‘God’s House’ is a detailed account of how Nicholaston House came into existence by the man who had the vision and was given instruction direct from God.

In 1990 God unmistakably led Sue and Derrick Hancock to Swansea to see a vision fulfilled which God had given them some years previously. The booklet (A5, 53 pages, colour) gives a brief factual account of what God did and is doing. It has been written for two reasons - to give glory to God and to show what very ordinary people can do when they step out in faith with God. 'All that we have accomplished, You have done for us' - Isaiah 26 v 12.